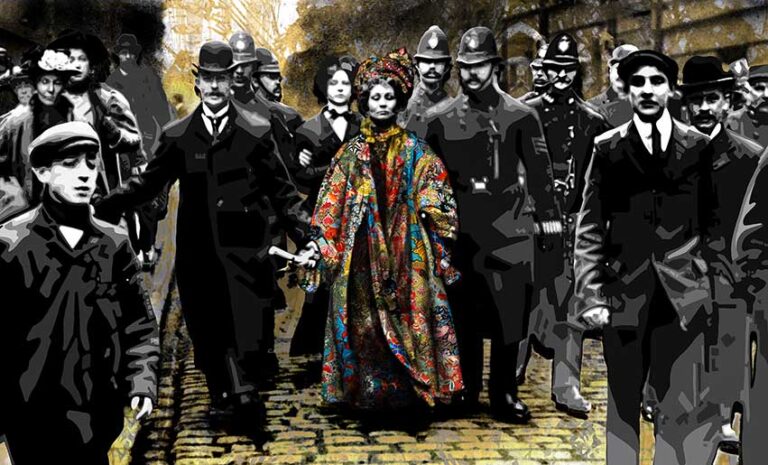 There are very few people in the history of our civilization who not only lead a movement but change the course of humanity, Emmeline Pankhurst falls into this highly exclusive category. She is one of the most recognizable feminist icons, whose hard work and bravery was key in securing voting rights for women in the United Kingdom and the world at large. Her tireless devotion to the suffragette movement is what inspired an entire generation of feminists to get out of their homes and take to the streets to fight for their rights.  This blog is about Art as a tool to fight for women’s voting rights.

Born in 1858, Pankhurst faced the brunt of the repressive mentality that was pervasive in those times. Having enough of this maltreatment, Pankhurst found the Women’s Social and Political Union which used aggressive tactics such as protesting and holding hunger strikes to bring attention to the suffrage campaign. After being arrested multiple times for her civil disobedience, Pankhurst put a halt to these tactics and demonstrations in order to take part in the World War I efforts. Due to women’s significant contribution during wartime, the British government granted them limited voting rights and a bill was passed that permitted women to be elected to Parliament. Shortly after her death, all of Pankhurst’s efforts came to fruition when Parliament finally granted complete voting equality to women on 2nd July 1928.

I have always known about Emmeline Pankhurst and only had a loose grasp on what her contributions were towards feminism. It was after when I was approached for a private art commission on Pankhurst as a principal subject, I found myself digging deeper into research to find out who she was as a person and as an activist – as a female artist I found her life fascinating and inspiring.  My private collector who commissioned the art initially had a different vision for the artwork, in which we had Wonder Woman kneeling respectfully in front of Pankhurst as if to honour her for being the true superhero and feminist icon. However, after several discussions and sketches the final artwork naturally converged to capturing the intense prime historical moment in which Emmeline Pankhurst is being taken away by police guards, after her attempt of forcibly entering the Parliament building to present a protest resolution to Prime Minister H.H. Asquith. The art is 150x90cm in size and is titled: “Pankhurst arrested in Victoria Street, 13 February 1908”.

My work as a female artist has always been feminist in nature, especially my previous series such as Ask A Woman, Earthly Grace and Inamorata. These series focused on honouring feminist icons in pop culture while also celebrating the female form and its many beautiful facets. With this commission on Pankhurst, I was able to broaden my understanding of feminist history and also pay homage to another feminist icon that survived and thrived in antiquated times within the oppressive political realm. Moreover, I believe that I have used art as a tool to bring attention to the history of voting inequality and the incredible efforts of the suffragists who campaigned and fought bravely for the voting rights of the future generations of women.

Nowadays, we take our right to vote for granted and have forgotten about the work and history that went into securing these rights for us. Women voting will always be a political act and a vital contribution to driving the feminist cause forward. Therefore, whenever we get the opportunity to vote, we should diligently look into the candidates that share our beliefs and go out to vote for them. Always remembering that each step we take towards the voting booth is only possible because of the determined efforts and sacrifices of women who did not take “no” for an answer.