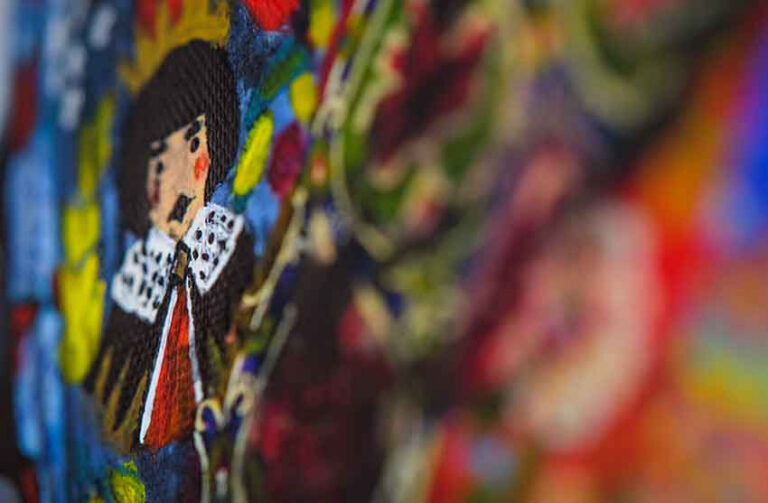 The King of Hearts is in All My Paintings

A keen observer might have spotted the King of Hearts as a recurring figure in my paintings, hiding between the colourful patterns and the intricate designs. Although, I prefer to keep all of my patterns completely unique to every painting, I like to insert the King as a little Easter Egg connecting all the paintings together in my own quirky way.

The design of this adorable character is inspired by the King of Hearts’ illustrations in the classic children’s book, Alice in Wonderland. He is shown as a man with a short stature, an innocent face with a giant crown and royal robes that engulf him completely. I was drawn to his whimsical character; he is subdued and more benevolent compared to the tyrannical and ruthless Queen of Hearts, the female antagonist of the book. In the book, we see him try to quietly pardon off people who have been ordered to be executed by the Queen and this really shows his soft-hearted nature. On top of all of this, we see him just be a fabulous and carefree character that is at times juvenile, but you cannot help but admire him.

Once the King of Hearts caught my eye, I started to dig deeper online into his symbolism and how he is represented in playing cards and Tarot cards. In a deck of playing cards, he is the only king not to have a moustache and peculiarly, he seems to be angling a dagger towards his head. As unique as this makes the King of Hearts, the reason for this odd lack of facial hair and dagger pointing is because of the printing process in the 15th century. Back in the day, wooden stamps that were carved by hand were used for printing, in order to produce cards that were affordable. Due to the repetitive process, the wooden stamp would wear out and the King of Hearts moustache soon faded away, until it was completely removed in the 17th century.  The same happened with the dagger, as the dagger was actually a large axe before the axe head faded away with the printing and the handle of the axe was redesigned to look like a dagger.

Tarot cards in general are quite fascinating to look at and have been a recurring point of reference in contemporary art. Even if you do not believe in them, they offer a visual treat with their colourful illustrations and intricate art designs. The King of Hearts is known as a King of Cups in Tarot and is shown sitting on a throne sipping from a cup in his right hand and holding a sceptre in the left one. His throne is floating on a sea of rough waves, but he remains calm and collected. He is considered to represent calmness, creativity and guidance. Those who pick this card from a Tarot deck are expected to receive guidance in their creative pursuits or are advised to be more diplomatic in order to avoid facing any conflicts.

How fascinating it is to see the varied portrayal of the King of Hearts across different mediums. This is why I include him in almost all of my paintings and I feel that his placement is more significant in my new collection, Psychomachia, where I dwell into Greek mythology which is famous for its complex monarchy involving the Greek gods. From my new collection, you can buy paintings online from my online store and if you are in Dubai, you can visit my art gallery to see the canvas paintings in person. So, the next time you find yourself in front of a painting of mine, keep an eye out for the little King of Heart because he is always watching…